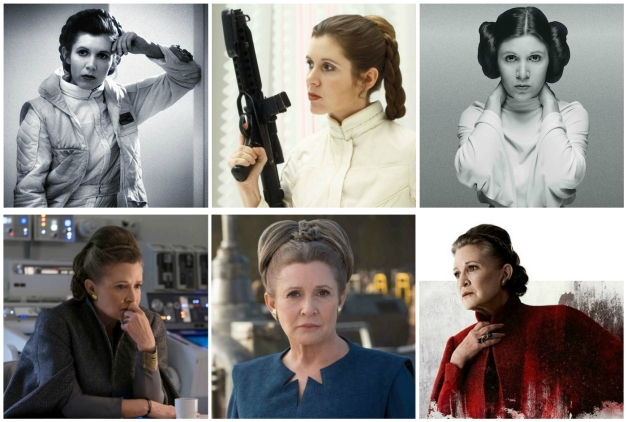 Everyone’s favourite Princess-turned-General, Star Wars’ Leia Organa was a force to be reckoned with from the moment she first appeared on screen, flipping stereotypes on their head from the off, and refusing to be the damsel in distress. In her first scenes, as her ship is breached and she’s taken prisoner, she doesn’t cower; instead, she fires her blaster gun at the bad guys, smuggles out a message to the good guys, and serves unadulterated sass to her captors. Thus, a legend was born.

Taking control of her own would-be rescue, and telling the men how it should be done, she was never forced to play second fiddle; she was truly the heroine of the saga. That said, and despite being a trailblazer for strong women when there were so very few in fiction, there’s no denying that Leia was sexualised (we all remember the metal bikini), but the true power of that scene isn’t how good Carrie Fisher looks, it’s the fact that Leia strangles her abductor with the very chains he used to try and bind her. She doesn’t need men to rescue her. Nor does she need a flashy lightsaber or even The Force. No, all she needs is her bare hands and a determination to survive. 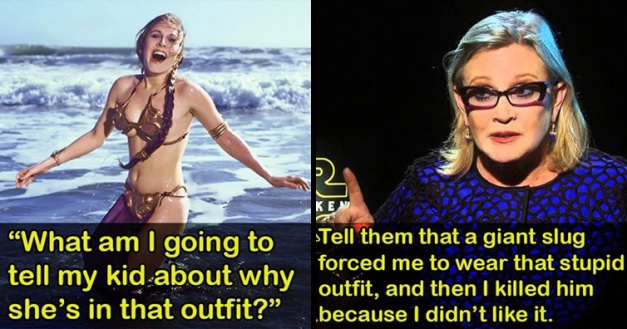 Carrie said it best herself…

Though it’s Leia of the original trilogy that most of us think of with the most nostalgia, Leia of the later movies is just as inspiring – if not, more so. Having dedicated her life to fighting the good fight, Leia is still on the front lines some 40ish years later. Older, wiser, but still snarky as hell, she’s not only a member of the Resistance; she’s its founder and leading General. Leia is quite literally the boss; an inspirer of hope throughout the Galaxy.

Wary of avoiding specific spoilers for the most recent film, suffice it to say that The Last Jedi lets us see another side of Leia, tapping into whole new realms of strength in more ways than one; stoic in her measured yet maternal leadership, but also vulnerable and human in the wake of her years of loss. And speaking of that loss, let’s just take a moment to appreciate that by this point, Leia has lost pretty much everyone and everything she loves (her home planet and adoptive parents have been destroyed; Han is dead; her brother is missing; her son has gone to the Dark Side) and not only is she still leading with strength and conviction, but not once has she been so much as tempted by the Dark Side herself, despite her strong Force connections – putting those Skywalker men to shame, you might say.

With the untimely and tragic loss of Carrie Fisher, Leia’s ultimate fate remains to be seen. We can only hope they do a true screen icon the justice she deserves. Whatever the outcome, may The Force be with her, always.

Chloe O’Brian is an agent working with the Counter Terrorist Unit in the TV show, 24. Portrayed by Mary Lynn Rajskub, she is both immensely intelligent and wonderfully forthright, never once mincing her words or holding back when she has something to say.

Throughout the show, Chloe consistently proves herself to be protagonist Jack Bauer’s most invaluable and trusted ally, going above and beyond the call of duty time and time again to aid him in his mission – even if it means jeopardising her position at CTU or putting her own life in danger. What I love even more however is her willingness to also stand up to Jack and call him out if she feels he is in the wrong; proving her commitment to her morals and showing us that even her closest friend isn’t beyond the reach of her personal conviction to do the right thing.

Wonderfully sassy and sarcastic, she never suffers fools lightly and comes out with some fabulous one liners and truly epic put-downs, delivered with dead-pan brilliance. Using her technical prowess to outsmart the bad guys and save the day on plentiful occasions, she is also not afraid to enter the field when needed.

Despite her tough, no-nonsense exterior, Chloe is well developed throughout the series, showing moments of true compassion and empathy (*sniff* Edgar *sniff*) and going through a crisis of identity following personal tragedy later in the series, but throughout it all, she never loses her confidence in her own skills as an agent and a fighter for the common good.

Though things have come a long way, there’s no denying that the representation of gender in fiction is still skewed in favour of men. Just look at the slander thrown at the female stars of the recent Ghostbusters reboot or the ongoing debate about lack of female representation in superhero movies, and it becomes clear that there’s certainly still room for improvement.

To celebrate some of the golden examples that have emerged from the male masses over the years however, I thought I’d start a new series on my blog, highlighting women in literature, film, television and gaming who broke the mould and gave women (and men) decent role models to look up to and admire.

Let’s start with one of cinema’s most iconic leading ladies: Ellen Ripley.

Ripley was one of the first women to lead an ensemble cast in the science-fiction and horror genres. Interestingly, the original Alien script was written to be gender neutral, allowing the casting directors and actors the scope to interpret the roles as they saw fit. Eventually, the decision was made to cast a woman in the primary role to help add an element of surprise, since audiences at the time would never expect her to survive. Thus, a screen icon was born.

Though she has portrayed Ripley in four entries in the franchise (with speculation currently surrounding a possible fifth turn), it is the second movie, Aliens, that is often considered Sigourney Weaver’s most impactful outing, and the one that saw her truly cement the character’s place in cultural, feminist and cinematic history.

Throughout Aliens, Ripley evolves from a weary survivor to a hardened, passionate warrior. Bonding with a young orphaned girl who is the sole survivor of her former colony, her maternal instincts kick in, making her a force to be reckoned with, particularly in the final quarter of the film, when she comes into direct conflict with the Alien Queen in an epic battle of mother vs. mother.

What is so impressive however is the way the writing, direction and superb acting from Weaver allow the character to display her softer, more feminine ways without ever diminishing her power or believability. Her womanly intuition and mothering instincts become arguably her greatest strengths and certainly never a weakness.

She is not an immovable and emotionless caricature (as many ‘kick-ass’ women in fiction are), nor is she the damsel in distress. Instead, she is able to be both feminine and strong, sacrificing neither side of herself in order to appease the men around her, and thus surviving on thrifty use of her own determination, resourcefulness, intelligence and bravery.