Here are some thoughts on a couple of recent reads. Coincidentally, though very different, both are mysterious, fascinating looks at facets of the human psyche. 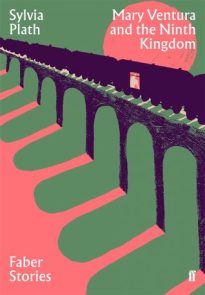 I tried some of Plath’s poetry years back and failed to properly connect with it, but if I’ve taken anything from this slim story, it’s that I must give her work another shot.

One of the recently released Faber Stories, Mary Ventura and the Ninth Kingdom is a previously unpublished short story that follows a young woman, forced to board a mysterious train, destination unknown. There’s barely a superfluous word, with Plath creating a number of beautiful images, and a tone of quiet menace that lurks in the background.

Though intentionally vague to a degree, and thus able to be interpreted in a couple of different ways, the allegory at work becomes increasingly clear as the tension builds. The theme of finding the will to live, and the strength to defy a seemingly unavoidable fate shines through; a meaning that takes on an added layer of poignancy when considered within the wider context of Plath’s life.

You can pick up a copy of Mary Ventura and the Ninth Kingdom by clicking here.

Sometimes, when you love a book, you want to push it into the hands of as many people as possible. Other times, you are well aware that it won’t work for a lot of people. Justine is very much an example of the latter for me. This strange and allegorical novel is a hypnotic look at the destructive power of obsession; the pursuit of physical beauty; and women as dehumanised objects of desire.

The plot follows an unnamed male narrator. He is a collector of art, and a beauty obsessive who becomes enthralled by Justine, a figure within a painting whom he believes he has met in real life. As he pursues Justine, and her twin sister Juliette, things become increasingly dark and disorientating. This creates a haze in which Thompson explores the blurred line between art and artist, whilst casting a quasi-feminist eye on the struggle for control between the sexes.

The evocative, exaggerated imagery of the novel reflects the importance of art and beauty to the narrative, whilst the hallucinogenic tone reflects the opium-fuelled daze and all-consuming obsession of the narrator’s existence. There are also many literary references throughout, notably those that draw parallels with Marquis de Sade’s Justine, Charlotte Perkins Gilman’s The Yellow Wallpaper, and Oscar Wilde’s The Picture of Dorian Gray. These various layers enrich the book’s thematic depth, creating the kind of story that is sure to invite deeper thought, and divide readers. I, for one, was enraptured by its singular surrealism.

You can pick up a copy of Justine by clicking here.