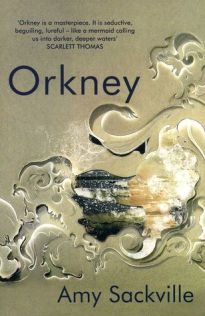 Orkney is a quiet, claustrophobic look at an unconventional relationship, fuelled by Scottish folklore. Richard is a 60-year-old literature professor. His 21-year-old wife is his former student. Pale, silver-haired, enigmatic, and beguiling, she requests they spend their honeymoon on one of the wild and remote Orkney Isles.

Each chapter follows a day spent on the island. It has to be said that this isn’t a hugely plot driven novel. Events, themes, and ideas are explored in an almost cyclical way. To some, this may prove frustrating. For me, it created a sense of ebbing and flowing, like the tide against the island’s shores; of being suspended in time and place, as the characters themselves feel once cut off from society. Sackville’s prose is so beautiful, her sense of setting and atmosphere so evocative, that I was more than happy to spend extra time in the book’s lilting grasp.

Richard is a storyteller, in several senses of the word. He is spending a sabbatical working on a book about female figures from myth and legend, and it becomes increasingly clear that the line between these fictional women and his real wife is very much blurred. Projecting his fantasies onto her, she remains nameless throughout his narration, presented instead as an impossibly idolised vision that she could never live up to; her version of events constantly contradicting that which he presents to us. Whilst it could be argued that the writing is overly flowery at times, it ties in perfectly with Richard’s desire to embellish and beautify the truth into something greater or more pleasing.

Ultimately, the book explores love, obsession, possession, and loss. There’s an air of mystery surrounding Richard’s wife. Who is she? What is her past? Why is she simultaneously drawn to and afraid of the sea? With Richard’s mindset ruled by his fascination with her, and her stifled sense of self reflected in her recurring nightmares of drowning, it becomes interesting to consider who holds the greatest power and influence over the other.

If you’re aware of the stories the novel draws from, there’s a sense of inevitability with regards to where the story is heading, and indeed, Sackville employs much unsettling foreshadowing throughout. But this adds a melancholic tone and a sense of mounting tension to the whole thing that really worked for me. With such a deft and subtle use of (possible) magical realism, and Richard established as a wildly unreliable narrator detached from reality, the end can be interpreted in several very different ways, at once tragic, chilling or hopeful, depending on your reading of the text. It’s one I would love to discuss with people!

If you’d like to read Orkney, you can pick up a copy from Book Depository by clicking here. If you’ve already read it, I’d love to hear your thoughts, particularly on the ending!

I read the playscript of The Last Witch by Rona Munro earlier this month in anticipation of seeing this production. I adored reading it, and am pleased to say that I enjoyed watching it on stage just as much. I was delighted to see that the production was very faithful to Munro’s original script, preserving its wealth of emotional impact and thematic nuance.

Plot-wise, the play is a dramatization of the story of Janet Horne, the last woman to be executed as a witch in Scotland, 1727. We follow Janet, a brilliantly well-realised and complex character, as she does what is necessary to get by, and protect her disfigured daughter, Helen. She comes in to conflict with the rural parish’s new sheriff following an accusation of witchcraft from a neighbour disgruntled by her strange behaviour and eccentric ways. What ensues is a game of wits, a struggle for power between the sexes, and a look at the reasons why a woman may want to have others believe she is a powerful witch. 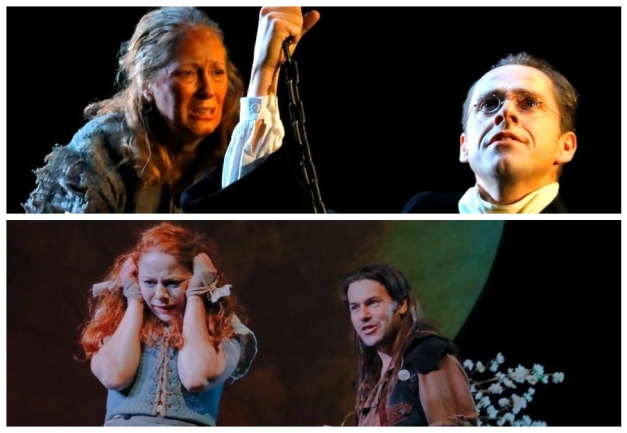 There is a brooding and ominous atmosphere throughout, and though it is punctuated by moments of black humour, it culminates in a powerful, rousing climax. All of this was convincingly brought to life by the cast of seven, with particular praise owed to Deirdre Davis for her performance as Janet; she is able to capture moments of wit, anguish, and poignancy with equal vigour and charisma.

The striking set design, and clever use of light and sound, further enhanced the impact and general mood of the show, making it one of my favourite theatre experiences for some time. If the show tours following its residency at the theatre in the hills, or another production of The Last Witch comes your way, I highly recommend checking it out. It is historic fiction at its best; immersive enough to evoke times gone by, and yet relevant enough that it can still resonate with a modern audience.

A bit of a different post today! I recently read (and loved) The Gloaming by Kirsty Logan, in which each chapter is named after a Scots word. Whilst I don’t have a particularly strong accent or think of myself as especially Scottish in the stereotypical sense, it did make me realise just how many traditional Scottish words and phrases are interwoven into my every day dialect. As a lover of stories and language, I thought it would be fun to share a few of my favourites, some of which I use regularly myself, others I just enjoy hearing.

It’s a sair fecht – A direct translation would be ‘it’s a sore fight’, but it’s used in the context of ‘it’s a hard life’; usually said with a sigh at the end of a long day. I picked this one up from my Grandad.

Dreich – Used to describe a dull, horrible day. We have ample opportunity to use this one in Scotland.

Haud yer wheesht – This essentially means ‘shut up’, usually said with exasperation when someone keeps rambling on.

Sleekit – A great way to describe someone who is dishonest or sly.

Dwam – A dwam is a daydream. My mum often tells us that a teacher once described her as being ‘in a permanent dwam’.

Glaikit – I love this word. If someone is glaikit, they’re slow or, frankly, stupid.

Numpty – A numpty is an idiot. What can I say, we’re a very sarcastic bunch.

Peely-wally – This means pale and is used to describe someone who looks washed out or ill.

Messages – To this day, I haven’t found anyone who can explain to me why we call groceries ‘messages’, and yet, we do.

Haver – This is both a noun and a verb. If you’re a haver, you never shut up, and may thus also be described as ‘havering a load of nonsense’.

Fouter – Again, this is both a noun and a verb. If something is a fouter, it’s an annoying, fiddly task. If you’re foutering, you’re making a needless fuss over something and over-complicating it.

Swither – If you’re swithering, you can’t make up your mind.

Shoogle – If you shoogle something, you give it a good shake.

Clype – A clype is someone, generally an annoying child, who tells tales to get other people in trouble.

Coorie – Coorie means to get cosy, as in to coorie under a blanket.

Tumshie – A tumshie is a turnip. It can also be used to call someone a fool, or as a term of endearment, similar to the way the French say ‘mon petit chou’ (‘my little cabbage’) – but I’m getting into a wormhole here, because I believe some people think that phrase originally came from choux pastry, rather than cabbages…

Awa’ an bile yer heid – Okay, I don’t think I would ever use this one in conversation myself, but it does make me laugh. Literally, it means ‘go away and boil your head’; used when someone is being annoying or talking nonsense.

Lang may yer lum reek – Again, this isn’t something I would likely say, but I love the sentiment behind it. It translates as ‘long may your chimney smoke’ and it’s an old well-wish that you would typically say when parting ways with someone; the idea being that if your chimney was smoking, you had surplus wood to burn, and thus financial stability and a warm, safe home. You tend to only hear this around New Year these days, as an old-fashioned way of wishing people a long and happy life.

Do you have favourite words or phrases from your native language or regional dialect?

Today is Earth Day – a movement designed to encourage celebration and conservation of our natural environment. To show my support, I thought I’d let Mother Nature speak for herself and simply share a few pictures of one of my favourite places in the world: Perthshire, the area of central Scotland which I call home.

I hope you enjoy the snaps and have a lovely Earth Day!

The sunsets here can be pretty intense.

There’s plenty of nature to enjoy.

We get a fair bit of snow in winter.

And contrary to popular belief, sometimes the sun even shines. Only sometimes, mind you.