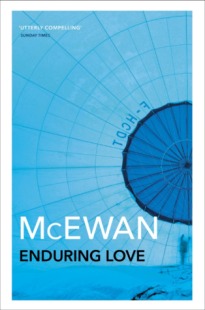 Enduring Love is a psychological literary thriller, in the truest sense of the words. The skill that evidently went into crafting this book is phenomenal; its balance of page-turning tension, eloquent prose, and thought-provoking thematic nuance so exact it’s like a masterclass of the genre.

The plot follows Joe Rose. Whilst enjoying a picnic with his wife, Clarissa, they become involved in a freak accident that ends in tragedy. Jed Parry, a fellow witness to the incident, becomes instantly and inexplicably obsessed with Joe from that moment. He begins to stalk him, testing Joe’s mental stamina, calling into question his rational outlook on life, and threatening to tear apart his relationship with Clarissa; all the while convincing him that Jed poses a serious threat to their safety.

What’s interesting from the off is the undercurrent of science versus religion. Our protagonist is a freelance scientific journalist. By contrast, his stalker is a religious fanatic, adamant that God has willed them together, and determined to convert Joe to the same line of thought. The dichotomy between Joe’s meticulous and rational approach to life, and Jed’s blind, overwhelming faith is stark, and serves as a major source of conflict and uncomfortable tension between the two. There’s also undoubtedly a note of critique in the way Joe’s harassment is handled, with the police uninterested given the initial lack of physical violence.

It becomes increasingly clear throughout the narrative that Joe is struggling to accept the role he played in the tragic event that began his ordeal, and to make peace with his sense of survivor’s guilt. As such, coping with trauma is another notable theme. It’s also true, however, that we can’t necessarily trust Joe as a narrator. He is telling us his story in first-person, after the fact, analysing events even as he describes them. Given that he frequently muses on the unreliability of memory, and how often people question his version of events with regards to his interactions with Jed, McEwan is clear that we shouldn’t necessarily take everything he says as gospel. This adds another interesting dynamic to the reading experience, and is represented well by this passage, which also shows McEwan’s prose at the height of its power:

‘No one could agree on anything. We lived in a mist of half-shared, unreliable perception, and our sense data came warped by a prism of desire and belief, which tilted our memories too. We saw and remembered in our own favour and we persuaded ourselves along the way. Pitiless objectivity, especially about ourselves, was always a doomed social strategy. We’re descended from the indignant, passionate tellers of half truths who in order to convince others, simultaneously convinced themselves. Over generations success had winnowed us out, and with success came our defect, carved deep in the genes like ruts in a cart track – when it didn’t suit us, we couldn’t agree on what was in front of us.’

How much is genuine harassment, and how much is self-projected victimhood, brought on to distract from latent guilt? This is the question central to Joe’s development as a character, our perception of him, and his interactions with those around him.

My only real criticism came at the end, where there is a brief section presented as an academic psychology essay, using the events of the novel as a case study. Though this is interestingly meta, given Joe’s line of work, I did find it a somewhat dry note to end on, and I can’t say it added much from a narrative standpoint.

That said, I thought this was an excellent book. I was gripped from the off by its almost unbearably drawn out recounting of the accident. This in itself was a stroke of tonal genius, perfectly capturing the sense of a horrific event playing out as though in slow motion. From there on, its look at psychosis; a relationship pushed to breaking point; and a man’s attempts to process a traumatising ordeal was utterly compelling. It reaffirmed for me how much I can enjoy McEwan’s work, and fuelled a desire to explore more of his back catalogue.

You can pick up a copy of Enduring Love from Book Depository by clicking here. If you’ve already read it, I’d love to hear your thoughts!