Of Salt and Shore by Annet Schaap | Book Review

Of Salt and Shore by Annet Schaap, translated from the Dutch by Laura Watkinson
Published by Charlesbridge, 2020
My rating: ⭐ ⭐ ⭐ ⭐ 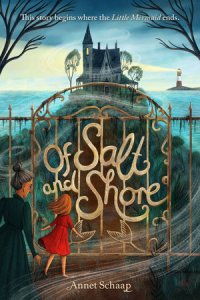 Of Salt and Shore can be read as an imagined follow up to the original version of The Little Mermaid, and I’m pleased to say it retains the contrasting menace and charm that characterise classic fairy tales. We follow Emilia, nicknamed Lampie, the daughter of a lighthouse keeper. When she is held responsible for a terrible accident that takes place during a storm, Lampie is sent to work off her debt at the Black House, the ominous home of the absent Admiral. It is said that a monster resides within the Black House, but what she finds is much stranger and far more complex.

I found this such a thrilling and enchanting read, with Lampie and the ragtag group she meets along the way endearingly flawed characters. Schaap both indulges in and subverts fairy tale tropes, creating an atmosphere that is somehow both befitting of the classic tales that came before it, and refreshingly original. I also appreciated the bigger themes she managed to weave into the story to add extra resonance for contemporary readers, with commentary on the likes of parental abuse, finding family, othering, and self-acceptance all enhancing the narrative.

Though the climax was suitably dramatic, I did think things came to a rather abrupt end, with a couple of threads left hanging a little too loose for my liking. This felt like an especially unusual choice for a novel that is both fairy tale inspired and middle grade, both of which tend to favour neat resolutions. Still, I thoroughly enjoyed every moment I spent with this whimsical story; grateful that it neither shied away from the dark lifeblood that runs throughout authentic fairy tales, nor lost the messages of love and light that make them timeless.

Thank you to the publisher for a free advanced copy in exchange for an honest review. You can pick up a copy of Of Salt and Shore (also published under the title, Lampie) by clicking here. 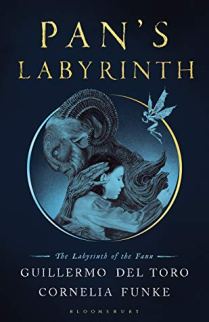 Pan’s Labyrinth is one of my all-time favourite films. More than a decade on from its release, writer-director Guillermo del Toro has teamed up with fantasy novelist Cornelia Funk to create an official novelisation. Set against the backdrop of war-torn Spain in 1944, the story follows a young girl as she gets embroiled in a dark and fantastical adventure, drawing heavily on elements of fairy tale and horror. This thread sits in juxtaposition with the very real brutalities of war, with del Toro exploring the concept of monsters both human and imagined, alongside themes of loss, grief, family, and resilience.

Sticking faithfully to the original narrative, if you like the film, it’s hard to imagine you’d be disappointed with the book. Ironically, however, my love for the film was probably what stopped me from completely adoring this; any small discrepancies or shortcomings standing out more than they likely would have to the casual reader.

The sinister and whimsical tone is translated well from screen to page. The prose is simple and very readable, but it’s occasionally punctuated by some striking imagery that serves as a nice nod to the strong aesthetic prowess of the film: “The trees anchored so deeply in the moss-covered soil they laced the bones of the dead with their roots while their branches reached for the stars.” I did think, however, that there was a tendency to repeat certain words and phrases. This could have been deliberate; a nod to the straightforward, motif-driven nature of fairy tales, but it stood out a little clumsily at times – especially the overuse of the modern phrase, ‘for sure’. I also think it was just a little too meek. Yes, it might be a fairy tale that flirts with the magical, but this story is dark and otherworldly. I wish Funke had embraced that, pushing for a lush and evocative feel, rather than pitching for what feels at times like a middle grade audience.

I love that it is, in many ways, a love letter to the power of storytelling, and the escapism if offers from the darkness of our own world: “When she opened the book, the white pages were so bright against the shadows that filled the forest, and the words they offered granted shelter and comfort. The letters were like footprints in the snow, a wide white landscape untouched by pain, unharmed by memories too dark to keep, too sweet to let go of.” This ties in nicely with one of my favourite aspects of the film; the ability to interpret it as genuine fantasy, or the imaginings of a troubled young girl desperate to escape. 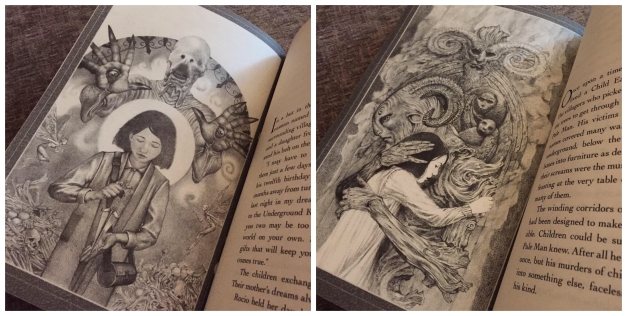 The book features some gorgeous illustrations, courtesy of Allen Williams.

The book is interspersed with short stories; fairy tales that can stand on their own, but which also serve as backstory for certain characters, locations, and events throughout the main narrative. These offer additional context not possible in the film, but I felt they interrupted the flow of the story somewhat, and threatened to push it towards full blown fantasy, rather than leaving things open to interpretation (though the stories could be read as the beloved tales that have fuelled Ofelia’s imagination, I suppose). Sometimes less is more, and I’m not sure we needed to know all of these extraneous details.

It’s hard to separate this from my love for the film, and therefore to judge it as its own piece of literature. The story, characters, setting, themes, and overall atmosphere crafted by del Toro are all fantastic – as I knew they would be. Revisiting the world he created via a new medium was at once nostalgic and fresh, and in that sense, I loved it. That said, I do think it would work best for people already familiar with the movie.

I suppose it was always going to be hard to please such an avid fan of the original, hence why this review for a book I actually very much enjoyed has come across more harshly than intended: I just wasn’t wholly convinced by Funke’s prose; a darker and more mature approach could have made this my dream read. Nonetheless, it offered a solid reading experience, and it was certainly worth picking up, even if it is a rare instance in which I’d argue firmly that the film is better than the book.

If you’d like to give Pan’s Labyrinth a go, you can pick up a copy from Book Depository by clicking here. If you’ve already read it, I’d love to hear your thoughts, particularly how you felt it compared to the film!

Beauty and the Beast | Theatre Review

Based on the classic story we all know and love, Birmingham Royal Ballet’s take on Beauty and the Beast made for a rich and visually captivating performance. The show really is a feast for the eyes, its greatest strength being the sumptuous costume design, ornate set pieces, and moody lighting; all of which come together to create an atmosphere that feels entirely in-keeping with the story’s fairy tale origins.

Sonically, the show is also a hit. Buhr’s specially composed score is seamlessly performed by the Royal Ballet Sinfonia. Intricate and textured, the music has a timeless, whimsical quality, honouring the extensive history of the narrative. As for injecting something new into proceedings, that’s where the choreography comes in. Though it is playful and original, the heavy leaning towards storytelling over conventional dance means there are a few moments in which the pace drags. When the show hits its stride, however, it’s an arresting experience, the second Act in particular really showing off the quality of the production across all departments.

Each member of the company did a good job with what they were given, and a couple of the big group routines were excellent. The standout individual performer was undoubtedly Beatrice Parma as the vixen-turned-woman. Her movement fused classical ballet with a strange vulpine quality. Her entire presence on stage was enigmatic and compelling.

Having seen a fair few ballets in my time, I can’t say this one ranks amongst the best, but it’s well worth catching during its UK tour if you have the chance. The recognisable story and approachable presentation make it accessible for enthusiasts and newcomers alike.