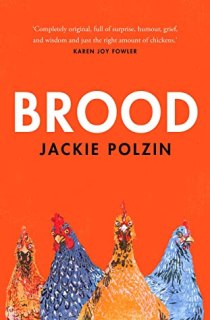 Ostensibly about a woman’s attempts to look after a small brood of chickens, Jackie Polzin’s novel is an understated look at grief and motherhood.

It becomes clear early on that our narrator has suffered great tragedy in her attempts to have a child, but very little of the book’s word count is dedicated directly to this fact. Instead, her borderline obsessive quest to keep her four beloved chickens alive – which makes for oddly compelling reading in and of itself – transcends into a clever look at trauma. By channelling all of her focus and anxieties into the care of her feathered friends, we see how throwing yourself into a project can offer much needed distraction, structure, and purpose when you may otherwise feel unmoored.

Having internalised guilt, it is also apparent that our narrator is setting herself a challenge: Does she have what it takes to be a mother? Can she safeguard and nurture life? I don’t want to spoil specifics, but suffice to say Polzin shrewdly explores the idea that we must absolve ourselves of misplaced blame. Sometimes, we can have all the best intentions and do all the right things, but it simply isn’t meant to be; the universe having its own plans. While sad, this conclusion is far more realistic than a happily ever after, providing a glimmer of hope that, while never easy, moving on from loss is indeed possible.

Though there’s an air of pathos that hangs over the narrative, it is also unexpectedly funny at times. This works on a number of fronts; offering much needed relief, adding depth to our protagonist, and exploring the close connection between grief and humour – the latter often essential in coping with the former. By keeping our narrator nameless, it is perhaps easier for the reader to project their own empathy and experience onto her, but it also speaks to the notion of identity: who is this woman if she cannot fulfil her desire to become a mother? I liked this creative choice, but more could have been done to comment on what it says about society that many women feel incomplete without having borne a child.

On that front, I do think the novel would have benefitted from a more direct tackling of its central themes in its final pages, rather than continuing to (deliberately) skirt around the issue. This alone would have greatly enhanced the established idea that we must all confront our pain in time. And while it does chime with the concept of fate within the realms of life and death, I would argue the book’s outcome becomes obvious long before we reach it.

Addressing well-worn themes from a unique perspective, the strength of Polzin’s prose, coupled with the subtlety of her craft, elevates Brood considerably. The result is a story that is smart yet hugely readable, and which improves the more time I take to mull it over.