The Monsters of Rookhaven by Pádraig Kenny
Published by Henry Holt & Company, 2020
Rating: ⭐ ⭐ ⭐ 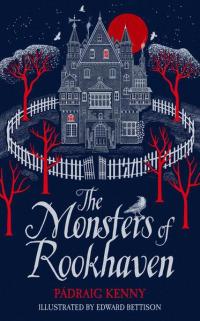 I picked this up knowing very little about it (due in part to a deliberately vague blurb), and there was definitely an element of my expectations not matching what the book actually set out to offer. I was anticipating something gothic and unsettling that flirted with magical realism, akin to Shirley Jackson’s The Haunting of Hill House. Instead, I got a middle grade-leaning fantastical story with a campy-horror vibe, more akin to The Addams Family.

We follow a ragtag family of strange “monsters” who live together in a mansion kept hidden from humans by magic. When the barrier protecting them is breached, two orphaned siblings on the run stumble into their hidden world, and drama ensues from there, as the monsters come into conflict with the residents of the neighbouring village. Though it never delves very deep, the story does touch on some nice themes, like the concept of found family, and the idea that real monsters hide among us, causing division by spreading fear of the Other. It also pays homage to several staples of the horror genre in fun little ways.

I appreciated the contrast between the slow-burn first half that focuses on establishing characters and lore, and the breathless latter-half that really ramps up the stakes. That said, there are definitely lapses in logic when it comes to the world-building and characterisation. If you can suspend your disbelief and submit yourself to the wildness of the ride, this certainly has its charm.

Performance poet, musician, and novelist Kae Tempest has written an extended essay that explores the role of creativity in fostering connections throughout society.

Nuanced and self-aware, the book opens with Tempest acknowledging their own privileges as someone who grew up white and middle-class, highlighting the problematic nature of a blanket call for unity. By recognising the validity (and necessity) of vocal pushback against injustice (like the BLM, MeToo, and TransLivesMatter movements), they embrace rather than dismiss the idea of difference. Instead of reductively claiming, “we’re all the same”, Tempest goes on to argue that the constantly evolving relationship between artist, art, and audience makes creativity a vital tool in bridging, rather than denying, our differences. Providing us with an opportunity to process, explore, and express our individuality (when creating ourselves), or to empathize with, educate ourselves on, and understand different perspectives (when engaging with someone else’s creative output), we can find common ground that transcends potential division.

Tempest completed and published the book during the covid-19 pandemic. The context of widespread isolation and the catastrophic impact it has had on individuals’ mental health, as well as the creative arts world at large, adds a whole other layer of resonance to its look at the importance of connection. Somehow, it allows the book to feel both timeless and very much of the now. And while a couple of points can feel somewhat tenuous, beyond anything else, the work cements Tempest as one of the most interesting, observational, engaging, and galvanising voices at work today.