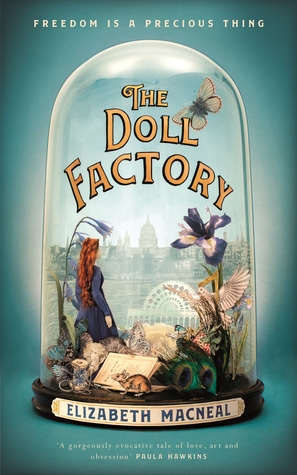 Set in 1850s London, this wonderfully evocative debut looks at art, autonomy, love, and obsession. Iris makes her living painting faces onto dolls alongside her twin sister, but she longs to be taken seriously as a true artist. When she is offered the chance to model for up-and-coming pre-Raphaelite artist Louis Frost, she agrees, on the condition that he will tutor her in return. But someone else is watching Iris’s every move. Silas is a lonely collector of curiosities with whom Iris shared a brief, (and for her) quickly forgotten encounter. Entranced by her unique beauty, however, Silas’s longings for friendship will soon develop into something decidedly more sinister.

This is such a brilliantly gothic read. Macneal’s writing is lush and intoxicating; the sights, scents and sounds of Victorian London practically leaping from the page. Much of the novel is technically a slow-build, and yet the pace never lags, the sense of mounting tension handled perfectly. And though the nature of the final act is arguably predictable (indeed, there is a lot of deliberate foreshadowing), it is no less chilling and gripping when it finally arrives.

Iris is an excellent heroine: talented, ambitious, headstrong, and determined to succeed in a man’s world. The book has really great things to say about the limitations placed on women at the time. With so much emphasis placed on physical beauty, Iris, who has a malformed collar bone and a slight hunch caused by complications during birth, and Rose, her twin sister who is heavily scarred from a near fatal case of smallpox, would both be considered “damaged goods”, unlikely to find a husband. The complex mix of fierce love and bitter resentment between the sisters adds a really interesting aspect to the narrative. That their only real prospect of bettering their station would be through marriage; that they would never earn enough as women to gain true independence; that Iris risks being disowned by her family and disgraced by society for agreeing to model (the act being seen as akin to prostitution at the time); and that despite her talent Iris must rely on the guidance and approval of men are all in for subtle though well-handled critique.

These latter points are explored particularly well. Macneal highlights the fact that using her body, either through prostitution or modelling, was one of few ways for a woman to earn decent money, and yet she would face social ruin as a result. The hypocrisy that men believed they should be able to admire and use women’s bodies while simultaneously vilifying them for it as a means of belittling their worth is both accurately handled from a historical fiction perspective and frustratingly resonant within the current patriarchal society in which we live. Its look at the art world also chimes true with the fact that to this day, far more paintings of women hang in galleries than paintings by women. I love that Iris wanted to prove she had every right to do both; that she was both beautiful enough to model for Louis and talented enough to one day get a piece of her own into the Great Exhibition.

As is usually the case within the gothic tradition, there is a romantic subplot throughout, as Iris and Louis grow increasingly close to one another. While not often a fan of such subplots, the chemistry between the two was so well realised, and permitted to develop organically over time, that I was completely won round. There are several great supporting characters too. I particularly adored Albie, a young orphaned lad who lives in a brothel with his sister, gathering dead animals to sell to Silas to try and raise enough funds to better their lives. When he begins to suspect that Silas may pose a threat to Iris, he determines to help her. His point-of-view chapters also do an excellent job of further exploring the stark contrast between the lives of the rich and poor.

I just loved every moment I spent with this book. It completely absorbed me as both a richly layered piece of literary fiction and as a compelling story. It’s true I felt the denouement was a little abrupt, but with prose, atmosphere, themes, characters, and a setting that were all so vividly drawn, this was just the gothic romp I needed; a fantastic look at womanhood, freedom, and resilience in the face of madness.

15 comments on “The Doll Factory by Elizabeth Macneal | Book Review”