Partly because I’ve enjoyed a couple of them myself recently, and partly because I always like to recommend some seasonally appropriate books in the run-up to Halloween, today I’m shining the spotlight on a few horror graphic novels. I like graphic novels in general, but I think horror is perhaps the genre best equipped to show off the strengths of the form; art being the ideal means of enhancing the kind of rich atmosphere and striking imagery that so often define good horror.

As always, I encourage you to share your own recommendations in return, but without further ado, here are some horror graphic novels to delve into if you’re in the mood for something spooky.

Forget black cats and pointy hats, the creatures in this offering are far more monstrous. Drawing on the more sinister, animalistic early mythology of witches, and accompanied by a suitably intense, frenetic and visceral art style, this is a captivating read about a family seeking a fresh start in the wake of trauma, in a place where the townsfolk make pledges to appease the monsters lurking within the trees.

An example of Wytches’ art style

Poe is one of horror’s most iconic names, so I’m sure he needs little introduction. That said, if you haven’t actually tried his work before, this collection is a great little sampler of some of his better-known shorts, brought to life by artist Gareth Hinds. The writer certainly has a knack for bold concepts and striking images, and it’s fun to explore the origin of some of the genre’s most beloved tropes.

An example of Poe: Stories and Poems’ art style

Through the Woods by Emily Carroll

I’ve revisited this several times now and I’m always utterly entranced by Carroll’s haunting artwork, which utilises colour and layout to such great effect. Though the individual stories don’t tend to stick with me, the overall sense of threat and unease she creates always draws me back – which is saying a lot for someone who almost never rereads. 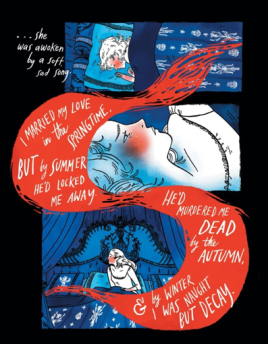 An example of Through the Woods’ art style

This fairy tale retelling poses an instantly enticing question: What if Snow White was a liar? Gaiman does well to completely reframe everything we think we know about a classic story from this new perspective – in which the so-called ‘wicked Queen’ is only ever trying to protect her realm from the true monster – without contradicting any of the tale’s major canonical details. Creepy and poignant in equal measure, Doran’s ornate yet macabre artwork serves as the perfect companion to the text.

The suitably gothic artwork in this adaptation of Shelley’s masterpiece stays true to the novel’s core atmosphere, allowing its narrative, prose, and themes to still shine despite some slight and well-handled abridging. A perfect means of re-exploring an old favourite from a new perspective, or a fantastic entry point for those who are yet to explore the origins of the science fiction/horror genre, this is a very successful adaptation.

An example of Frankenstein’s art style

What are some of your favourite horror graphic novels?