My Dark Vanessa by Kate Elizabeth Russell
Published by Fourth Estate, 2020
My rating: ⭐ ⭐ ⭐ ⭐ 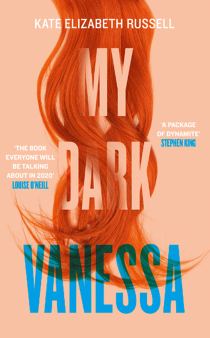 If the word ‘important’ is used to describe a lot of books these days, in the case of My Dark Vanessa it feels entirely earned. In the era of the #MeToo movement, this emotionally exhausting and oddly enthralling novel poses a blunt yet difficult question: What if some victims don’t want to punish their abusers?

We follow Vanessa at the age of 15, when her English teacher Jacob Strane first begins to groom her, and at age 32, when a string of historic abuse allegations levied at Strane force her to re-evaluate the love she thought they shared. The use of a dual timeline works well both to reflect the lasting impact of physical and emotional trauma on someone’s psyche, and to capture the recent shift in public consciousness concerning the dangerously outdated systems and attitudes that serve to shield abusers.

Vanessa is such a fascinating and well realised heroine. It would have been very easy to present her as one of two extreme tropes in a bid to guide the reader’s response to her and her situation. But Vanessa is neither the perfect, unfalteringly naïve fallen angel, nor the wilfully rebellious ‘bad girl’ who deliberately seeks out trouble. Instead, Russell introduces us to the ‘everywoman’ equivalent of a teenager; a young girl who simply wants to do well and fit in. Indeed, it is her own realistic flaws that make her all the more relatable, and her struggles all the more upsetting.

In terms of pacing, it’s a bit of a slow burn, and yet I found myself flying through it. Though Russell doesn’t shy away from the painfully uncomfortable physical escalations in Vanessa and Strane’s relationship, it is the psychological manipulation that is particularly hard to stomach. As the reader, we are able to see the groundwork being laid by Strane to cover his own tracks from the off. Not only does he go to extreme lengths to convince Vanessa she is the one in the driver’s seat, consenting to his every whim, he employs emotional blackmail to guarantee she will never betray his trust, even if she were to see him for what he really is. By taking time to show this toxic power imbalance, Russell perfectly encapsulates the true horror of the grooming process.

This also goes some way to explain why girls like Vanessa don’t necessarily see themselves as ‘victims’ or ‘survivors’, why they may shy away from coming forward to expose people, and why their experiences are no less valid than those who want to scream their truth from the rooftop. Having been led to believe her entire existence revolves around the ‘love’ she shared with Strane, confronting the idea that she has shaped her life around something considerably more toxic is an immensely painful process. The nuance and emotional turmoil of trying to navigate the moral dilemma inherent to this situation are captured with aplomb, and I respect that Russell doesn’t pretend to have all the answers, refusing to wrap Vanessa’s story up neatly in a bow.

Where the book didn’t work quite so well for me was the glut of references to Lolita. While the focus on a paedophilic relationship between an adult man and a teenage girl makes comparisons inevitable, I felt it became too literal and heavy-handed at times. Carefully placed nods throughout the text could have worked really well to heighten the novel’s already well-drawn themes. But rather than letting the similarities speak for themselves, Russell constantly explains parallels between Vanessa’s and Dolores’s experiences in an overly meta way that threatens to feel forced.

That said, I think this book is wonderful; truly deserving of all the hype it has generated. It is the perfect read to open up vital discussions surrounding the complexities of abuse and victimhood, and a timely reminder that every individual has the right to gatekeep their own story.

You can pick up a copy of My Dark Vanessa by clicking here.