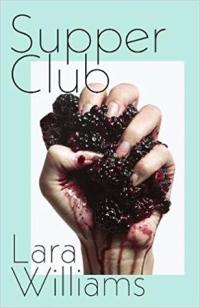 It’s proving tricky to reconcile my feelings for this book, which I found simultaneously incisive and frustrating. We follow Roberta, a woman in her late 20s who sets up a supper club where she and fellow women can intentionally live to excess. It starts as a means of indulging their love of food without the scrutiny of men or the pressure to appear dainty and refined, but the gatherings become increasingly hedonistic and dangerous.

I love what the supper club itself represents: women’s desire to break free of the male gaze and societal expectations; to live freely and to unapologetically take up space in ways and places they would normally be excluded from. It’s no coincidence that many of the women attending the gatherings have had their bodies violated or policed in some way by men, be they rape survivors, domestic abuse victims, or otherwise. As such, it’s clear there’s more going on beneath the surface for many of these women – Roberta included – as they use the supper club as a means to take back autonomy of their bodies and to collectively excise their buried trauma. Flashbacks to Roberta’s time at university a decade prior build on this theme, showing how the seeds of early trauma and social conditioning can continue to influence your wellbeing, behaviour and outlook years down the line. Across both timelines, Williams also does a good job of showing how both overt and micro-aggressions can quash female resolve and cause women to internalise misogyny of their own.

My trouble is how ironically self-indulgent the book is. Clunky dialogue full of exposition regularly spells out the novel’s every thematic intention with little room for debate. When a book is otherwise tackling interesting topics well, this heavy-handedness feels particularly awkward. Whilst it’s great to read a novel with lots of casual LGBT+ representation, the handling of queerness also felt a little clumsy and tokenistic at times. The introduction of a trans woman is particularly uncouth. She is deliberately misgendered, repeatedly referred to using male pronouns, allowing for her trans identity to be revealed like a plot twist before the switch is made to her correct pronouns. Well-meaning representation, perhaps, but certainly not without its flaws.

The book occasionally homes in on the importance and complexity of sisterhood, and I think this is where its real strength lies. But while the female supporting characters all remain flat archetypes who float in and out of the narrative purely to further Roberta’s story, a lot of time is spent on the various awful men in her life. This feels like an odd choice considering the book’s supposed focus on women removing themselves from male influence. Given the novel’s fixation with transformation, I also think the ending was underwhelming somehow; important in its own way, but not as bold or subversive as the novel seemed to be striving for.

This is one of those novels that had so many good ingredients (pardon the pun) that I kept feeling like I should be enjoying it more than I was. Perhaps that means there is also an element of right-book-wrong-time at play. Whatever the case, I can understand why this one has been so polarizing, but there was certainly enough of merit that I’d be willing to check out what Williams does next.

You can pick up a copy of Supper Club by clicking here.