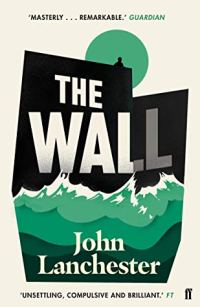 John Lanchester’s Booker nominated The Wall is a solid and very readable offering. My only real complaint is that it’s so topical it runs the risk of underwhelming due to its lack of a new or interesting take on well-worn themes.

Set in the UK in the not too distant future, it’s a dystopian novel in which sea levels have risen to such an extent that the country has built a vast wall around the entirety of its land border. Movement between nations has been outlawed, and refugees (known as The Others) who attempt to breach the wall must be shot on sight. Our narrator is a young man at the beginning of his mandatory two-year service on the wall, where he will be trained to repel The Others. If at any time he fails to do so, he faces exile onto the open water.

If the book aims for subtlety with its themes and real-world parallels, it misses the mark quite considerably. If, however, Lanchester intended to tackle head on the issues of climate change, the mistreatment of migrants and refugees, and the hypocrisy of Trump’s wall, he certainly succeeds. I like that our narrator is presented as an everyman, and that his role as equal parts hero and villain shows how warped social norms have become (he adopts the killer instinct of a Defender very quickly, and he isn’t averse to using Help; surviving Others who have essentially been enslaved). That said, I don’t think Lanchester really has anything new to say with his world building or his narrative. There are no warnings to heed or solutions to consider that aren’t already part of the general discussion surrounding these issues in the present day.

One aspect I did think was handled really well, however, was the tension that simmers between young and old. Older generations are shown to feel a sense of shame for damaging the planet beyond repair. Their children, now grown up, resent that they are the ones having to bear the brunt of the impact by serving on the wall. This was one particular instance in which the ties to current events (the ongoing school strikes for climate, in which young people are calling for action from adults) felt woven into the story in a cleverly understated and meaningful way.

Split into three parts, the handling of the book’s pacing is interesting. The first third seems to deliberately drag, reflective of the dull, isolating, and monotonous way of life that dictates normal service on the wall. The second part, during which an inevitable attack from The Others takes place, becomes much more breathless. In the third part, things become largely melancholic and contemplative again; the icy and often devastating calm that descends in the wake of the storm. Though I felt the narrative beats hit throughout were easy to predict, I can’t deny that I remained invested.

Whilst The Wall may not be the most original or ground-breaking take on speculative dystopian fiction, it was a swift, easy read that lays bare some of the greatest obstacles we face as a global population. By forgoing sentimentality in favour of something decidedly more pragmatic, Lanchester pulls no punches in his critique of where we’re heading.

If you’d like to read The Wall, you can pick up a copy by clicking here or here. If you’ve already read it, I’d love to hear your thoughts!

19 comments on “The Wall by John Lanchester | Book Review”