A Spell of Winter by Helen Dunmore | Book Review 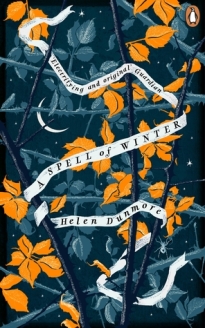 Told in gorgeous prose, A Spell of Winter is a strangely beguiling tale that explores forbidden love, the burden of secrets, and the struggle to escape the cloying inheritance of family.

Set largely in the build up to WWI, the story is narrated by Catherine, a young woman who feels increasingly cut off from the outside world. Abandoned by her mother as a child, embarrassed by the mental breakdown of her father that led to his hospitalisation, and ignored by the grandfather who finds too much pain in her resemblance to his absent daughter, she clings to her brother, Rob, for comfort. Hunkering down for the winter in their secluded, crumbling mansion, their mutual misplaced need for love takes their relationship down a dark and dangerous path that will pit them against the few who remain close to them.

First and foremost, Dunmore’s prose is stunning. With her sumptuous use of words, she evokes a rich, gothic setting, and a quietly sinister and claustrophobic atmosphere that I adored. Her characters are complex, difficult to root for and yet oddly sympathetic for all their flaws. By presenting them and their often deplorable actions without judgement, she asks us to question human boundaries, allowing the reader to draw their own conclusions in many instances.

There’s a subtle yet deftly handled thread throughout that explores the construct of society, and how quickly we can revert to basic animal instincts when removed from its grasp. Though the house has a dominating presence, many of the book’s key moments – instances of sex, violence, conflict, and death – all take place in the surrounding wildlands. As the book progresses, nature begins to reclaim the old mansion, and Catherine finds satisfaction and meaning through her work on the land. I thought this understated yet powerful sense that we are not so far removed from the natural world was handled really well.

I also very much enjoyed the book’s unconventional look at the idea of female autonomy. Catherine – like her mother before her – takes charge of her life in unexpected ways that defy social convention. Both arguably felt ensnared and defined by their role within the family, and both must find their own ways to break the chain of inheritance, both literal and metaphorical.

I was all set to give this book five stars throughout the first two thirds or so. The rich, lilting quality instantly captured me, its use of gothic hallmarks right up my street. In the final third, however, there is something of a tonal shift. Whilst the book retains its sumptuous edge, the coming of the war redresses the characters’ focus and priorities. Whilst this makes complete narrative sense, I was so enraptured by the air of quiet eeriness that I couldn’t help but feel a little sad to see the goalposts shift somewhat.

All that said, this is a uniquely compelling read that ticked so many of my boxes, I won’t be at all surprised if it stays with me for quite some time. With its blend of beautiful writing, gripping narrative, and cleverly handled deeper themes, it’s easy to understand why this was the inaugural winner of the Women’s Prize for Fiction. Given that she has an extensive back catalogue of work to her name, I’m excited to see what else Dunmore went on to write.

If you’d like to read A Spell of Winter, you can find a copy on Book Depository by clicking here. If you’ve already read it, I’d love to hear your thoughts!