How Much the Heart Can Hold | Book Review 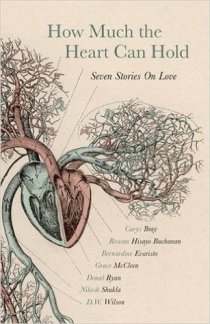 Subtitled ‘seven stories on love’ (though there are actually eight in this paperback edition), this anthology sets out to quash the idea that love is a purely romantic notion. It does so by having each of its stories explore a different kind of love; such as unrequited love, obsessional love, familial love, and love for oneself.

I had been looking forward to picking this up for a while. After all, there are a couple of authors featured within that I already really like (Donal Ryan and Carys Bray), and some others I was keen to try. Perhaps those high expectations contributed to my prevailing lukewarm feelings, but I have to admit that I found the collection as a whole, and most of the individual stories themselves, stronger in concept than in execution.

That said, I’ll talk a little about the ones I enjoyed most. White Wine by Nikesh Shukla is a simple, readable, and timely story that shines a light on institutionalised racism. Its message is clear, without being heavy-handed: You cannot see how wrongly you are being treated by others until you love and accept yourself for who you are.

Codas by Carys Bray is about the evolving nature of familial love. Our main character, a woman in her 40s, is at the stage in life when her son is beginning to find his own feet, whilst her father is becoming more dependant with age and illness. Both still need her maternal brand of love and support, but the way it manifests towards both is changing as the cycle of life moves on.

It Was Summer by Phoebe Roy (the 8th story exclusive to the paperback edition) uses the structure of the seasons as the backdrop to a new relationship between two men, as their love for each other ebbs and flows.

A couple of others had brilliant set-ups, but one employed a little too much magical realism for my personal taste, whilst another was too thin on plot, and far too overt with its political message (even if I agreed with it). The other three, I have to say, were entirely forgettable.

Altogether, that made for a very mixed reading experience. It’s certainly worth checking out if the overarching concept intrigues you, or if there are writers involved that you’re particularly keen to try. But I can’t say it’s a collection that is likely to stay with me.

If you’ve read How Much the Heart Can Hold, I’d love to hear your thoughts.

7 comments on “How Much the Heart Can Hold | Book Review”