I’ve seen a few of my bookish chums posting about their most anticipated releases of 2019, and I couldn’t resist joining in. This is by no means a comprehensive list of exciting reads due to come out next year; just a few that are high up on my list of interest so far.

Keep in mind that precise release dates may differ depending on country and edition, but for the sake of ease, I’ve listed them chronologically in terms of their UK release, and have linked to them all on Goodreads, in case you want to know more.

This is being pitched as ‘part ghost story, part Nordic thriller’, and sounds as though it may draw on fairy tale and mythology; which is all right up my street. It focusses on a girl who can absorb someone’s emotions and memories simply by touching their clothes, with things taking a twisted turn as she seeks to uncover the meaning behind this strange ability.

The Last by Hanna Jameson – published 31st January by Viking

Part locked-room murder mystery, and part dystopian, this follows 20 survivors of a nuclear war who are holed up together in a hotel. When a body is found, they realise one of them must be the killer. It’s pretty ambitious to combine two such distinct genres, but if Jameson pulls it off, this could be a thrilling read.

This is historical fiction set in Iceland (my favourite place on Earth). It’s also giving me some major Rebecca vibes, with the suggestion that our heroine feels haunted by the spectre of her husband’s first wife, which I’m totally here for. Set during the witch trials of the 17th century, ‘in a land governed by religion and fear’, I’m hoping this could be a dark, atmospheric, and transporting read.

The Twisted Tree, The Last, & The Glass Woman

The strange and intriguing concept of this one hooked me right away: a college town is swept by a strange new illness that sees victims fall into a deep sleep they cannot be woken from. But once unconscious, their brains show unusually high levels of activity. It sounds as though it’s going to be a quiet dystopian, low sci-fi, speculative novel with a focus on female characters; and if all of that is true, I can’t wait to dive in.

In ‘a world of secrets and horror’, this ‘tantalizing thriller’ sees boys and girls trained in separate schools ‘for geniuses’, unaware of each other’s existence. I adore Bird Box, a novel by the same author, and it sounds as though this one could have a lot of creeping intrigue and gender commentary. Sign me up!

Described as ‘claustrophobic’, this is set in ‘an eerie, old Scottish manor in the middle of nowhere’. Frankly, I don’t need to know anything else, because if that’s not my brand I don’t know what is. Props to Rachel for instantly knowing that this would appeal to me, and for promptly bringing it to my attention. 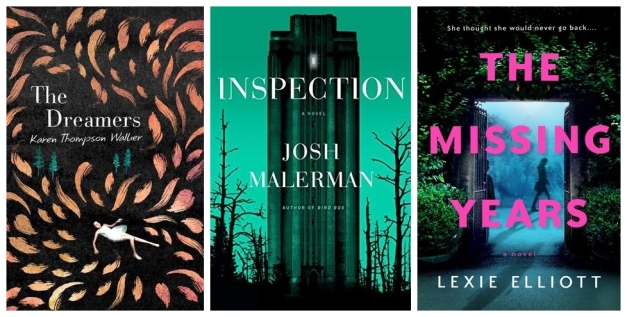 The Dreamers, Inspection, & The Missing Years

There’s no cover art or concrete release date for this one yet, but how could I not mention a collection of sinister, feminist horror stories? I’m already a big fan of Logan’s work, which often has good queer rep, and draws from folk and fairy tales. These particular stories are said to be ‘dark and visceral’, exploring ‘female experience, domestic claustrophobia, desire, family ties, and male aggression’. Consider me HYPED.

There we have it! What are some of your most anticipated releases of 2019?

15 comments on “Most Anticipated Releases 2019”