I saw this challenge over on Rachel’s blog, and couldn’t resist giving it a go. The rules are simple: You must answer the questions without looking anything up on the internet, and without looking at your bookshelves! Let’s get started.

1. Name a book written by an author called Michael.

War Horse by Michael Morpurgo. I haven’t actually read this one yet, but I do own a very nice edition. I’m seeing the stage adaptation next year, and so I’ll hopefully pick it up before I go, so it’s fresh in my mind.

2. Name a book with a dragon on the cover. 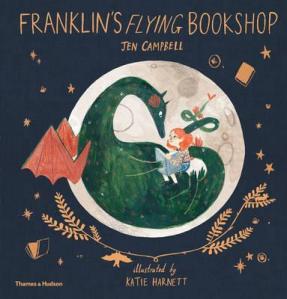 I was worried about this one for a second, because I don’t pick up a lot of fantasy, and Harry Potter felt like an easy way out, but then I remembered Franklin’s Flying Bookshop by Jen Campbell, with illustrations by Katie Harnett. This is a children’s picture book about a friendship between a young girl and a dragon, both of whom love to read.

3. Name a book about a character called George.

George by Alex Gino – it’s right there in the title! This is about a young trans girl, who is determined to both embrace and prove her true gender identity by landing the title role in her school’s production of Charlotte’s Web.

4. Name a book written by an author with the surname Smith.

Autumn by Ali Smith. This is the first instalment in Smith’s ongoing Seasonal Quartet. It’s the only book by her that I’ve read so far, but I’m hoping to pick up Winter next month, given that it’s set at Christmastime.

5. Name a book set in Australia.

The Bus on Thursday by Shirley Barrett. This one came to mind because I only very recently added it to my TBR, and I’m very excited about it. It seems to be something of a strange horror/comedy hybrid? Well, the tagline describes it as ‘Bridget Jones meets the Exorcist’ – and perhaps that will prove to be the mashup the world didn’t know it needed until now.

6. Name a book with the name of a month in the title.

The Mars Room? That really is pathetic, but I’m having such a mind blank, and Mars is French for March, so…

7. Name a book with a knife on the cover. 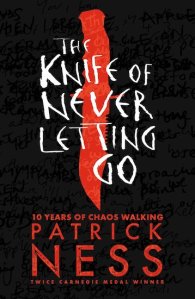 The Knife of Never Letting Go by Patrick Ness, which is book one in the Chaos Walking Trilogy. It’s set in a world populated only by men, where everyone can hear everyone else’s thoughts in a constant, hectic mass known as Noise. When our hero stumbles upon an area of complete silence for the first time, he learns truths that upend his whole life.

I’m going to be very literal with this one and say… well, One by Sarah Crossan. This is a YA book, written in verse, about conjoined twins. It follows them as they come to terms with the reality that they may have to face life-threatening separation surgery.

9. Name a book with an eponymous title.

Rebecca by Daphne du Maurier. I know I mention this in tags/challenges all the time, but I adore it, and it’s genuinely the first book that came to mind for this prompt – aside from Harry Potter, obviously. I also think Rebecca is pretty interesting in comparison to other eponymous characters, when you consider how greatly her power and influence hang over the narrative, without her ever actually appearing in the book.

Proof of movie; which you should check out if you like very weird, very dark, visually gorgeous stuff; especially when it’s led by excellent women.

Annihilation by Jeff VanderMeer. Firstly, I think both the book and the film are hugely interesting and thought-provoking, and it’s a shame they don’t seem to be spoken about more often. Secondly, it’s one of the rare examples where I actually enjoyed the film more than the book, but both have really stayed with me.

There we have it! I was going to pretend to gloat about coming up with an answer for every prompt, but then I remembered that I said The Mars Room, so never mind.

I wasn’t specifically tagged for this, so I’ll leave it open to anyone who’d like to give it a go. Let me know if you do so I can check out your answers!