Most Anticipated Releases of 2018

Now that 2017 is all wrapped up and resolutions have been made, we can start looking forward to what the next year has to offer. I’m actually nigh on hopeless at keeping up to date with new and upcoming releases, so to an extent, this post is a call-out for a heads up from you guys about what books I should be aware of. That said, there are a few books already on my radar, which I’ve mentioned below for anyone else on the lookout for what could be some of 2018’s most exciting new reads (for me, at least). 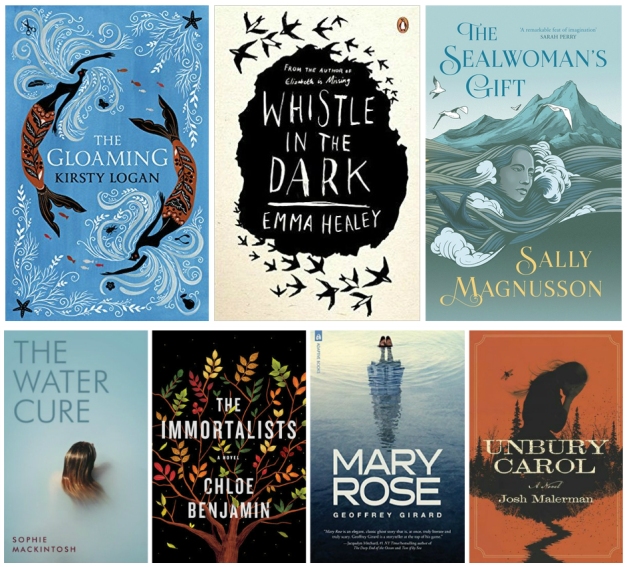 Some of my most anticipated releases of 2018

The Water Cure by Sophie Mackintosh

Described as a “blazing vision of suffering, sisterhood and transformation”, the opening of the blurb for this book was more than enough to hook me in, so I shall simply share it here. It’s somewhat vague and mysterious, but I’m definitely getting some feminist, dystopian vibes, which I’m all for:

“Imagine a world very close to our own: where women are not safe in their bodies, where desperate measures are required to raise a daughter. This is the story of Grace, Lia and Sky, kept apart from the world for their own good and taught the terrible things that every woman must learn about love.”

The Sealwoman’s Gift by Sally Magnusson

I adore Iceland. I adore immersive historical fiction when it’s done well. I adore stories about stories, steeped in the tradition of folk and fairy tales. This book promises to provide all of that, and I am ready for it, I can tell you. Inspired by true events, the book gives voice to an Icelandic woman who is one of 400 people seized by Barbary pirates in the 1600s and sold into slavery in Algiers, who uses the stories of her homeland to survive in a culture that feels completely alien.

I’ve seen the J.M. Barrie play that inspired this intriguing, ghostly tale, and whilst I enjoyed it, I felt the story could have delved a little deeper, hence my excitement when I heard it was being adapted into a full-length novel. It centres around a young woman who disappeared as a child for thirty days. Though she returned unharmed, she had no recollection of what occurred, and her behaviour grows increasingly strange as time goes by, with her fiancé determined to find out exactly what happened all those years ago.

The Immortalists by Chloe Benjamin

This book focusses on four siblings who are all told the exact date they will die by a travelling psychic whilst in their adolescence, and explores the ways this knowledge shapes each of their lives over the years that follow. That’s all I need to know! (The pretty cover doesn’t hurt either, to be fair.)

The Gloaming by Kirsty Logan

I love Kirsty Logan’s writing, as there is a lifeblood of folk lore and fairy tales that runs through her work, which coupled with her beautiful prose and deft handling of characters swept me up with all three of her previous books. The Gloaming features an island setting, a lesbian mermaid, and themes of love and grief – AKA, sign me up.

Despite being on my list of most anticipated releases, I’m actually going into this one with a fair few reservations, not least because it’s technically a western, and that is so not my cup of tea normally. I loved Malerman’s novel, Bird Box, however, and also enjoyed his novella, A House at the Bottom of a Lake, so I know he’s capable of creating gripping plots, and fascinating characters and concepts. I love all things fairy tale-esque, and this is supposedly a twisted take on Sleeping Beauty, about a woman who slips into death-like comas, and the danger this puts her in when her husband plots to exploit her condition by burying her alive and stealing her fortune.

Whistle in the Dark by Emma Healey

Not too dissimilar to Mary Rose in basic concept, interestingly, Whistle in the Dark is about a mother’s search for the truth after her teenage daughter disappears for four days, refusing to discuss what happened, and acting increasingly strange and secretive upon her return. Healey’s novel, Elizabeth is Missing, wasn’t perfect plot-wise for me, but it was very well written with a fantastically well realised heroine, so I’m keen to try more from her.

There we have it! What are some of your most anticipated releases for 2018?

14 comments on “Most Anticipated Releases of 2018”